The Laba street art festival took place on Mackinon road last Saturday. This is how it went:

Achieving ‘cultured’ status in this country isn’t hard anymore. You don’t have to have gone to a ‘big’ school or to have finished university; hell you don’t even have to be literate. As long as you can transform a pile of rubble into something even marginally better looking than before you tinkered with it, you’re an art genius, and therefore cultured.

Rubble? Sure. Art? Sure.

To go with this new artsy you, you need dreadlocks; the art world can’t have you looking too conventional.  With a dreadlocking gel and a head of hair, you’re good to go. One of the signs of a society on the rise is the level of indifference it shows towards convention. The more ahead it is, the more interested it’ll be in a grungier look.

At LABA, all the monsters in the woodwork that is Kampala crawled out and gave such a raw, unabashed display of talent that the journalists in attendance could be recognized by the way they were bolting from tent to tent trying to admire and scribble simultaneously. They looked so ridiculous that they were probably taken as whole exhibits of their own.

People danced A LOT: A group of lightly muscled Adonises kept giving performances the mechanics of which people were too distrated to pay much attention to because of the hard macho tones in which their biceps kept communicating with their triceps.

Closet transsexuals: According to one Collin, this group’s ridiculous gyrations and cloying theatrics were representations of the way women behave, a sort of fun way of delivering a satirical message. If that was their intention, it was an epic FAIL. Women at their most ridiculous/decadent/ disgusting don’t even begin to resemble them, because they’re pretty and look positively alluring in red lipstick. I hated those bastards. They crossed from limp, over done satire into latent homosexuality.

Mantis: Nyange dancing troupe was at the first tent and it performed all day. One of their performances stood out because this one man would start doing a dance that looked like agwara but just like that! he’d turn into a praying mantis, and not by magic either; just really creepy bodily distortions.

There were also kids who were trying very hard to twist their bones and irreparably shatter their spines and crowns by dance. Are break-dancers suicidal?

Sparkly stuff: From the amount of jewelery that was being sold, it’s safe to assume that half the Ugandans who’re involved in art deal in it. Some pieces were fantastic, some atrocious. The ones exhibited at Isha’s gallery tent however were so extraordinary that my first reaction was to thank the lord for my girl parts, after which I saw the prices and nearly died. There’s nothing like a street art fair to alert you to just how meager your resources are.

African Yoga: Yes, it exists, and no, yoga did not originate from the Middle East, as was explained by Pablo, an eccentric but charming man whose only claim to body hair was one long katutuwa at the back of his head. If his descriptions are anything to go by, yoga is the best thing since deodorant and should be tried by absolutely everybody.Find him at In movement- Kansanga for more information. 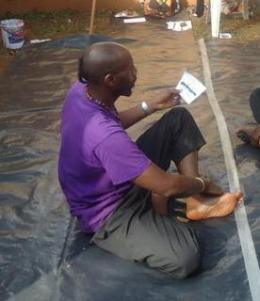 Solitude: If you’ve read Marquez’s 100 years of solitude, I’m sure you share the view that he moaned way too much about the subject. You’re also aware of the solitude-paranoia that it leaves one with. When I lost my friends, as is inevitable at a street fair with thousands of tents, all that boo-hoo solitude drivel from the book was making me feel pretty pathetic, so I went and had my face painted.

Food: Biryani, pork and chicken was what laba had to offer. The quantities were tiny in proportion to the money charged, I thought. Apparently, fatcats are expected to be svelte nowadays. To be fair, the food wasn’t hideously priced if you weren’t feeling cheap.

Hugs!:  There was a sweet group of people, headed by Roshan, Founder of poetry in session, who traipsed up and down the street, arms outstretched inviting people to fall into their bosoms. It was even allowed to double and triple deal which made some girls very happy. People even started placing themselves strategically in the way of these hug givers.

To crown it all, there was a brilliant concert where Ife thrilled the crowd with her eccentric dance moves that she dubbed ‘getting funky with the earth’. The Zimbabwean emcee was funny enough, but he made an unnecessarily large number of boda boda and porthole jokes.

It’s true that our art society has leaped and bounded over the past two decades, but it’s equally true that a lot of bullshit is disguised as art. There’s an unhealthily large Emperors-clothes complex where by people are afraid to be the first throw their hands up and say “Ahh ahh .This Piece is utter bollocks”.