Recently, I was weaving through traffic, just trying to get to the other side of the road with the breakfast muwogo I’d bought from Kamwokya market.  As I was about to plant my foot on the pavement, a boda boda whooshed past me. You guys the bike passed so close  that it would have hit my belly I hadn’t contracted it in fear.

No I do not have a potbelly. It’s an adorably round affair that contracts when I’m terrified.

Now this bodaman, instead of riding away grateful that he hadn’t caused an accident, turned his head and yelled, “You stupid woman! You cross the road as if you are a cow!”

To be honest, I am not a great road crosser. I like roads best when they are empty. Anything but that and I’ll (usually) either skitter across like a large dudu, or make fast friends with whoever else is crossing at the moment. Roads make me nervous, but not stupid. I wasn’t to blame this time. The man and his motorcycle appeared out of nowhere and tried to kill me dead. Full of annoyance and  embarrassment, I squeaked something at his disappearing back about his mother and her morals.

Later that day, after I’d mostly forgotten about this incident, I clicked a link that Ukamaka Olisakwe posted about three peoples’ experiences in Nigerian traffic. The stories painted what I thought was a fascinating picture of  Nigerian city life that I was determined to do a Ugandan version.

I wrote a blogpost and a few thousand updates/tweets asking  y’all to share some of the interesting experiences you’ve had while using public transport in Uganda. It wasn’t easy. The stories came dripping, then trickling, then rushing in (thank goodness). I will post some today and others on Thursday. 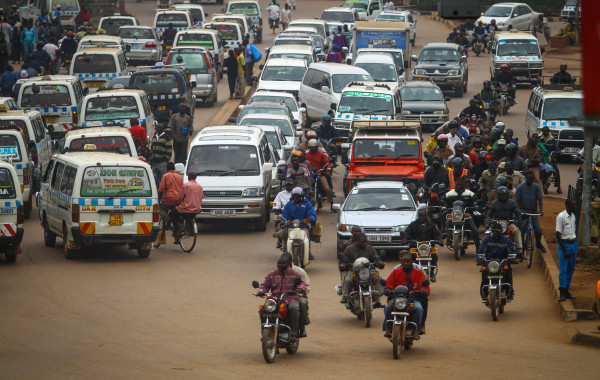 Darlyne: One time, before getting on a boda, I politely greeted the rider. We chatted some on the 10-15 minute ride to my house. It was just polite conversation. Weather, traffic, such things. When I got off and paid, I also wished him a good day. He then asked me to marry him. Apparently, his other passengers don’t greet and bid adieu. I told him I was sure he would one day find a good woman but I was already taken.

For all those interested in finding marriage partners, you now know what works. A few Good mornings and Goodnights should get the object of your affection brimming with desire and thoughts of marriage.

Ronald’s story features those curious people commonly known as brokers. They hang around taxi stages, selling their time to drivers. For a small amount of money, they will enter a taxi to make it appear to be filling up faster than others. This makes customers gravitate towards it. He says:

I entered a taxi in Wandegeya that was full of brokers. When it was finally ready to leave the stage, the driver paid the guys and off we went. But alas! When we reached Mulago stage, three quarters of the passengers disembarked. The driver started to cry and lament. He had paid the brokers and hadn’t gotten a profit. I was too amused.

Kawuki:  I was crossing the road one time, walking on a zebra crossing when this impatient and impudent taxi driver almost ran me over. Seriously, he only braked when he was a few centimetres from my nose. I yelled (in Luganda), “Don’t you see this is a zebra crossing?” to which he loudly replied, “Oli zebra?” I was stunned. I had no words. I just walked away shaking my head and holding back laughter. The driver was laughing. I didn’t want him to see my amusement.

There are tons more so check back, will you?  Have a safe week .

3 thoughts on “Kampala Traffic: I am not a cow.”