Too young to marry.

Over the ages, “Too young’ has carried many meanings for different civilizations of the world. In the day of Jesus, it was perfectly all right for the holy spirit to go knocking on the womb of a 13 year old Mary but if any of that were to happen now there would be a massive scandal (unless they lived in Spain  in which case everything would be bueno).

Many of our mothers had us while still in the lap of childhood. The only reason I can think of for this is that they were still reeling from a time not far before theirs when people had to become men and women at the first sign of puberty because the life expectancy was short. Life had to be lived in fast forward.

Now however that the average Ugandan has at least 54 years in which to live and priorities have generally shifted from home and hearth to knowledge, careers money and networking, it always comes as a shock to me when facebook notifies me that a person I went to school with has gotten married.
My reaction usually goes from confusion to dread to pity because it seems so terribly rushed.

There are many roads to fulfillment, I know and for some people, marriage is the golden pot but why so early? When we graduate from university, we’re still hungover from years of education. Our true selves have only just emerged (if we’re lucky. self actualization can take a long time). Why would you willingly rush from childhood to an adulthood complete with the prospect of babies? Personally, I intend to enjoy the sweet freedom of fully owning myself before making the decision to start a life with somebody as dewy and sparkly eyed as I am.

The girls and boys stepping straight out of the lecture room onto the aisle have their reasons, I’m sure, but I’m familiar with only two.

One is the desperation to get out of their parents’ homes. People are unwilling to return home every night to the mutual discomfort and eventual resentment that arises when a young adult and an old adult both try to stand their ground.

Also, in what foreign media I’ve read, living with your parents after university is taboo; a sign of laziness on the child’s part and long suffering on the parents’. Things are different in Ugandan culture however. While it’s normal, admirable even for boys to skip the fold at the first sign of a beard, women have it rough. Voice your desire to get your own place and sengas will solemnly inform you that you’ll never get married. You’ll have become ‘spoilt’. In-laws won’t want to associate with a girl that lives out of her father’s home, apparently.

Our society is so hangover on the patriarchal way of doing things that a woman means nothing if she hasn’t found a man to validate her existence. If she’s not living with her father, it has to be with a husband.

It must be exciting to find a person that makes you feel wanted, alive, complete but rushing to seal the deal might mean disaster for the both of you. Maybe he still has a roving eye to outgrow, or perhaps she’d like to accumulate more graduation caps.

The last reason I can identify is pressure from relatives and the mentality they have that if a girl is unmarried by 25, she deserves to be treated like milk that hit it’s sell-by date yesterday.

If you know something I don’t please enlighten me in the comment section.

It all started when Oliver Mtukudzi came to Uganda last August. His show was well publicized. Whenever I caught one of the many ads on TV, or heard one over the radio, every hair on my being would scream YES. This was not because I was obsessed with the great man’s music, I’m ashamed to say. It was all about some guy.

The opening act was to be done by ZOLA and within that band was a boy that I’d become infatuated with. My approval of his face and his voice was so deep that I googled Mtukudzi and even asked my friends to raid their parents’ music collections. I didn’t want to go for the show knowing just one song: ‘Todi’.

On D day, I had everything ready- beautiful dress, decent purse, but alas, my shoes wouldn’t do. Those were the dark times before I had become wild about footwear, so I had exactly three pairs in my life and they all looked a bit shabby; overworked.

A plan came to me. I would buy stilettos from Wandegeya, learn how to wear them before leaving the shop, sashay to the show and steal the boy’s heart.

The shoes I got were everything I considered beautiful at the time. Ribbon, check. Shiny, check. I paid for them, wore them and proceeded to drag myself to the nearest stage with my eyes leaving the ground a total of zero times.

I hopped on a boda and directed him to office where colleagues were waiting for me. In retrospect, I should have gone straight to Serena and sat on the stairs with a book until the show began. That would have saved me the excruciating walk up the slopping parking lot of my office and the sniggers of the guards.

The show wasn’t as well organized as it was publicized. We had to stand jammed against each other in an overcrowded lobby for one and a half hours. By the time we were being shown through the door, what little mastery I’d had over the shoes had disappeared along with my resolve to bear pain with dignity. 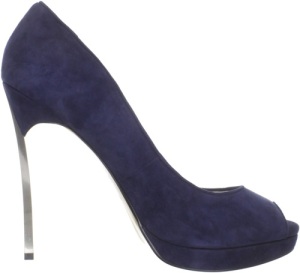 I did the kakinda man walk to my seat. The suffering didn’t end there. Friends wanted quick words outside the hall during the show, the toilets beckoned, etc. That was an awkward day, but not as ridiculously embarrassing as two weekends ago when I attended the wedding of a workmate.

I wore high heeled boots. They were very pretty- on my shoe rack, and even on my feet. I had no car to ferry me from place to place, so I wore really comfortable clothes hoping that the comfort on my body would somehow soothe my feet when they’d begin their inevitable lamentations.

After standing in line for food, my instep was practically bleeding. I left early, so the walk back to the main road was harrowing, involving evil school children who were screaming their laughter behind me. I finally discarded my fear of fast moving vehicles, stood in the middle of the road and hitched a ride.  The moment I reached Ntinda, I bought a pair of brogues.

Not all women are created equal. Probably, some are born with steel in the backs of their legs and in the insteps of their feet. Either that or there’s a plastic surgeon in Kampala who modifies legs to be able to stand stilettos and I just haven’t found him/her yet.